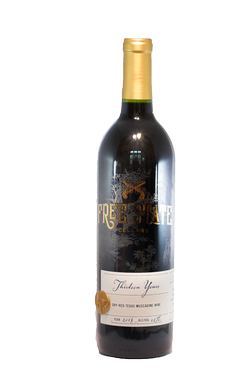 Because where you grow matters....  Our Heirloom Wines, made with our estate-grown muscadines, raise a toast to that 40-mile stretch of No Man's Land on the Texas-Louisiana border known as the Free State of Sabine.

The Free State of Sabine officially lasted from 1806 to 1819, just Thirteen Years.  Born in a time of revolution and taking the lead from the American Independence a few years prior, this group of pioneer and outlaw men went on to embolden Texans to embrace their own independence less than two decades later.  We showcase this independent streak and spirit of adventure by crafting a beautiful, intense dry red from muscadines, often better known for sweet wines.

Made from our estate-grown black Noble Muscadine at Free State's Willow Street Vineyard, we uniquely highlight the bright cranberry, apple, and lime flavors, smoothed out by banana and honeydew tones.  Earthy salinity and sharp lime haunt the palate long after the sip is gone.

As muscadine is a true Southern wine, it only seems right to pair it with classic Southern comfort food. Try it with BBQ, ribs, pork chops, and other fatty meats.

Sign up for our occasional email and be one of the first to take advantage of limited offers and upcoming events.